Over the many years I have spent gardening, I have dabbled in starting my own seeds.  There are countless reasons to consider doing this yourself.  You can start varieties that are not readily available for purchase for example.  It affords you an opportunity to get a head start on your growing season, and let’s be honest, it's cheaper.  You can buy six lettuce plants for $3.00 or more already started, or a packet of lettuce seeds for $1.99 that might have literally over 100 seeds in it.  As your garden ambitions grow, starting your own seeds just makes sense.

But what doesn’t make any sense whatsoever, is buying prepared seed starting mixes. I am embarrassed to admit that I have fallen for this far too many times, even this year to be honest, but I am vowing now to never make this mistake again. 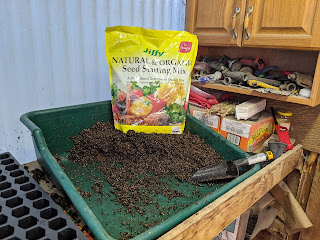 I think I paid like $5.00 or so for a small bag of seed starting mix like the one shown in this picture.  I was walking around Wal-Mart and there it was and I was like, oh yeah, I need some of that, so I grabbed a couple bags.  Then I remembered that all seed starting mix is made of peat moss and a small, and I mean I could barely see any and ended up adding more, small amount of vermiculite. I am an idiot.

Why you might ask…. Well, mostly because I knew better, and I walked across the road to the neighboring Home Depot and found a huge bale of peat moss for just over $10.00.  Now, remember that I had to add more vermiculite to the seedling mix I bought…. So I basically paid the exact same amount for two bags of loose, sifted peat moss as I paid for a whole compressed bale of it next store.

Dumb.  Live and learn I guess. 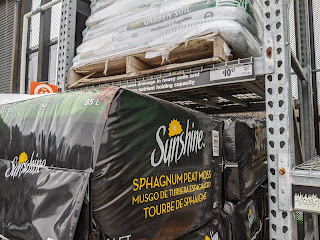 So, what does it take to make some seed starting mix.  Well it's simple really, all your need is peat moss and vermiculite.  Literally, that’s it.  And based on what I discovered when I dumped out my seedling mix, the vermiculite is practically optional. I could barely see any of it in the commercial mixture.

Yes, you can use Coco Coir instead of peat moss, but I cannot find that stuff on the shelf as easily as I can find peat moss.  And honestly, when I do, it flies off the shelf before I can get to it. If you are ordering supplies online, making a choice between the two is up to you. 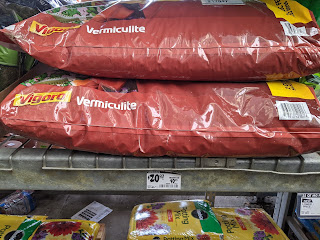 Based on the prices I found at my local Home Depot, you can get a bale of peat moss for just over $5, and a bag of vermiculite for around $20.  These two things alone will probably make enough seed starting mix for 90% of gardeners with some to spare.  I would say as a generalish rule, 10 parts peat to 1 part vermiculite is about right but it's honestly a preference issue more than anything. I generally just keep adding small amounts of vermiculite until I get something that looks about right.

As an added bonus, if you have ready access to some compost, then you have what you need to put together a pretty fair potting soil mixture by just adding it to this seed starting mixture.  You might consider adding some perlite to the potting soil mixture, but honestly, this mixture of Peat moss, vermiculite, and compost is all you need for growing plants in pots or raised beds.  The perlite is mainly functioning as a drainage improvement. I would do ⅓ of the seedling mixture, with ⅓ compost and ⅓ perlite, give or take.  The biggest benefit if you're a small scale gardener like I am, is that this approach would allow you to triple the volume of planting media vs just using your compost alone.

So, don’t make the same mistake I did.  Go out and get yourself some peat moss and vermiculite and make your own seed starting mixes. It is way cheaper than buying the premade stuff and will likely be an even better mix when you make it yourself.