A few year back I was really getting into the chicken thing.  My Pintrest boards were full of all these crazy ideas from Chicken Tractors, to Chunnels (chicken tunnels around your garden) and custom feed mixes... I even spent a bit of time fermenting their feed and sprouting seeds for my flock.  All of which were tons of fun and maybe something I will visit again for this blog.

But one of the coolest discoveries was mealworm farming. The concept seemed simple enough.  Mix some chicken feed with some oatmeal and other grains, throw in a chunk of apple or potato and go get yourself some meal worms.  Then you just sit back and wait and watch the mealworms appear out of nowhere.... at least that's what they were all saying online. But....

Where Do You Get Mealworms?

Well I am sure there are lots of options, Amazon comes to mind.... you can buy anything on there.  That's where I get the red wigglers for my worm farms actually. But for me, it was as simple as a quick drive down to the local pet store. I bought a small container of maybe a dozen mealworms.  One of those, take them home to feed your fish or lizard type packages.... but I gave them a home and let them grow.  And that is where the true magic of this story comes in.  From that one single box of a dozen or so worms, I now have hundreds if not thousands of mealworms.  And it has been just about as easy as everyone said it would be.  I just leave them alone 90% of the time, and they live, grow, and reproduce in the containers I give them.  Its pretty amazing when you think about it.

How Do I Grow My Mealworms 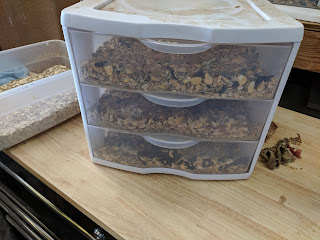 The concept is pretty simple.  Like most small pets they need just a few basic things.  A place to live, something to eat and drink, and that is about it. For mealworms, it couldn't be easier.  I am fond of the three drawer storage bins you can get for storing reams of paper, or even those drawers that fit under your bed for storage if you want a huge farm. To these I add a mixture of layer crumbles, and whatever grain I can find.  Might be just a C.O.B mixture (Corn, Oats, Barley) or even oatmeal from the grocery story.  This mixture is both their home, and their food, and in time, they will completely consume it down to nothing but a dusty substance called frass, which is basically their waste. You also want to throw in a chunk of apple, carrot, potato, radish, etc. so they have something to "drink."  I don't worry if it molds as they don't seem to mind themselves. When I want to find mealworms, I just find the most recent veggie addition and they are usually piled up underneath it.  That's it.  Seriously.  Now just walk away and be patient.....like really patient, until the magic starts to happen. 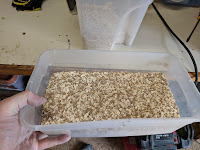 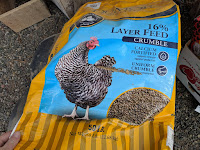 Mealworms follow a standard insect life cycle, in fact this makes them one of the perfect examples of this life cycle to study.  They start life as an egg and then hatch into what is known as larva.  Mealworms start life as a tiny version of what you are most familiar with, and slowly grow into the much larger worms that we buy freeze dried in the feed store, or feed our chickens or other pets live.  From there, they pupate and form a pupa.  The first time I saw one, it kinda freaked me out as I didn't know what it was right off the bat.  They are kind of a white crazy looking little insect like thing with no legs, and when you pick them up, their tails wiggle.  What is happening inside is similar to the caterpillar inside its cocoon, our worm is turning into its adult form, which is a little black beetle.  Once you have adult beetles running around inside your farm, the cycle is about to complete itself as they live to simply mate and lay as many eggs as possible before they die.

If you started like me, your dozen or so meal worms are about to lay lots of eggs, and given time, those eggs will go through the same life cycle before they themselves are adults laying a lot of eggs.  If you don't feed very many worms early on, then pretty soon you have an amazing population explosion!

Here are some things that I found helpful along the way.  First of all, seriously don't stress about them.  Its best to just forget about them and let them do their thing, checking on them only to make sure they have something still moist to get water from.  I would also occasionally remove the old, dehydrated remains of whatever was in there and throw it into my compost piles on occasion.

Secondly, consider how you want to expand.  One method that I used when I was ready to start new colonies was to simple begin removing the pupa and placing them into a fresh, new container.  Very soon I would have adults and shortly after hundreds of tiny little mealworms.

Dealing with their waste is something to consider as well.  It is very dusty and blows around easily.  I like to use this to my benefit and use a blower or fan to separate the worms from the frass.  Yes you might loose a few small worms, and you are certainly blowing eggs all over the place so mind where you choose to do this, but it turned out to be a very effective way to separate the worms out so that I could get  them some new bedding to chew through.

Finally, you want to think about how you are going to feed them to your flock.  Casting them on the ground will teach you how fast they seem to be able to burrow into the ground to escape.  I like to use them as a treat and set a small pan or dish on the ground in the coop or even hold it for the chickens to come and eat out of.  This way, I know that the majority of the worms get eaten.  And don't worry about taking a bit of bedding with you.... after all, its just chicken food.

All in all I have to say I have really enjoyed raising mealworms and find it to be a useful and easy addition to the diet I am able to provide my small flock of chickens.  If you have animals that might enjoy some fresh mealworms, consider starting your own small farm and growing your own.

I am working on a short video I took of the last bedding changing event and once I have it uploaded, I will be sure to get it posted here as well.  As always, there is more information over at our original web site which you can view here.

Posted by AtoZHomeandGarden at 10:21 PM

Email ThisBlogThis!Share to TwitterShare to FacebookShare to Pinterest
Labels: Chickens, Grow Your Own, Mealworms