Easiest Way to Catch a Chicken

Moving My Chickens to their Summer Housing 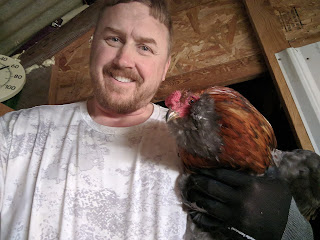 Early on in my efforts to raise chickens I discovered that they were hard to catch.  It seemed so easy. They were just casually pecking away until that moment they realized you were getting a bit closer than normal..... that head pops up and they start this nervous sounding cluck and before you know it, they are off to the races.  I don't want to know how much time I have spent trying to catch chickens.

But I am hear to attest to two things about chickens that make catching them as easy as can be.  The last time I had to catch mine for their relocation to their summer coop it took less than ten minutes to catch and move all ten chickens.  These are the only two things you need to know to make this process go smoothly for you too. 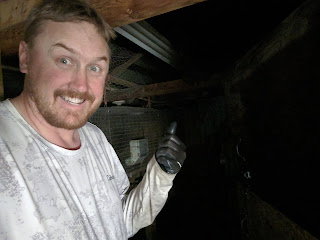 This might seem like a pretty obvious thing, but if you are new to the whole chicken thing I will clue you in on a bit of a secret.  Chickens like to roost in the exact same spot every night.  Once they get used to it, they will go back night after night like clock work.  If a chicken gets out, and you aren't sure how you are going to catch it, just make sure that it has access to its roost access point (open a gate toward dusk maybe??) and it will happily return back with the rest of the flock that evening.

Be a Roost Robber 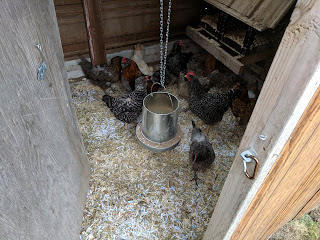 This tendency makes moving chickens from one housing situation to another super easy.  If you have to move chickens, do it at night after the sun has gone down.  In the dark, chickens that are roosted won't fly too much if at all..... I mean its dark.....they can't see where they are going so...... they just sit there.  That's why when I need to move them, I just become a roost robber and go grab them one at a time off their roost and set them gently on their new roost in their new location.  Most of the time this is all it takes.  They wake up, observe their surroundings and then return to their new roost the next night just like they have always been there.  I do sometimes have a couple stubborn hens that want to go back to their old roost, but after a couple moves (and maybe a wing trim) they learn to stick with the rest of the flock and all is well. 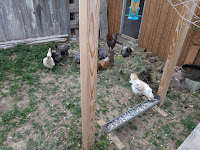 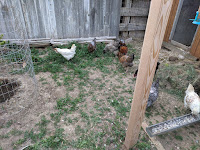 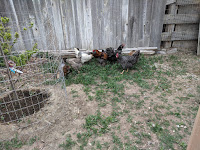 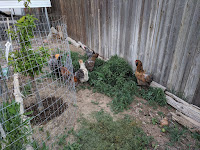 As you can see they were pretty happy to be in their new quarters. The weeds had grown up a bit this spring so it was like a huge salad bar everywhere they looked.  It's kinda funny that we throw pumpkins in here at the end of the year, and they pick through them throughout the fall.  Pumpkin seeds after all are a natural dewormer I have read. But every spring we have tons of sprouted squash and other seeds in this space.....until these girls figure out how tasty they are.

So, if you have to move some chickens, use their natural roosting instincts against them and don't waste any time chasing them around.  Just grab them while they are sleeping and move them to their new bed.  Its the easiest way I know, to catch a chicken.
Posted by AtoZHomeandGarden at 10:25 PM No comments: