Ten Uses for Your Homemade Jam 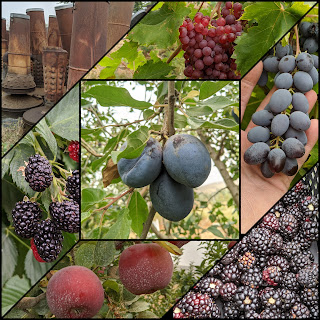 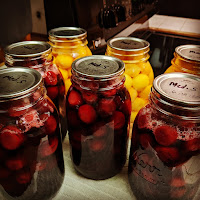 Okay, full disclosure….. I went a little nuts on the jams and jelly making this year.  We can blame it on the events of 2020, or the fact that we were home more, or just the fact that I was worried about food security in general, especially after the whole toilet paper scare this spring….. So as fruit came on, we canned!  We bought produce by the case, grew what we could, visited local you pick orchards, and even gleaned what we could from family and friends.  We canned cherries whole, because we love them that way, dried every fruit we could get in the dehydrator, and made a ton of jam! 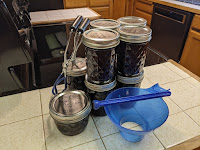 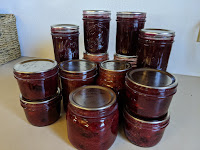 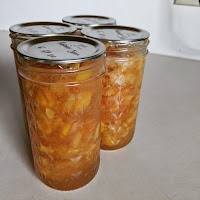 Now when I say a ton of jam, well let’s just say we have a wide variety.  There was the strawberry jam, followed by the cherry jam and then the peaches came on, so we made peach jam.  We did jalapeno jams, and plum jam, and while we didn’t get any apricots, we did get ahold of some pluots so there is some of that too.  Blackberry jam, check.  Raspberry didn’t go quite as planned, but it was okay because we also experimented with a zucchini jam flavored with jello…. Actually not too bad, and a good use for overgrown zucchini.

But after the dancing stops, and you're staring at an entire cupboard full of jam, you eventually settle on the real pressing question.  What in the heck are we gonna do with all this jam!?  I mean, I like PBnJ as much as the next person, but seriously.  There is a lot of jam!

So, to that end, I did some researching and some soul searching to see if I could figure a way out of this jam.  See what I did there.  You know you laughed a little on the inside.

And to that end, I present my top 10 ways to use your preserved jams throughout the year.  There is so much more in store for those luscious preserves than just a standard Peanut Butter Sandwich.

Ok, yes I took the easy route for number one here a bit, but it's hard not to.  From as far back as people have been preserving fruit, jam and jelly on rolls, toast, bread, bagels, english muffins, and the lot has been a staple. Who hasn’t slathered some sweet spread on a warm roll with butter, or added some to cream cheese and whipped it together before smearing it on a bagel.  Jam on bread is just…. Well it's just good.  So let's not overlook the most obvious use and be sure to plan on some of that jam being used the old fashioned way.

This one is almost as iconic as the bread mentioned above.  Who hasn’t had a piece of cake with some strawberry or raspberry jam sandwiched between the layers.  It’s such a nice addition to a really beautiful cake as the fruity sweetness really rounds out the flavor profile.  But while doing research, I discovered that there is such a thing as jam cake….. Which takes the whole jam and cake thing to a whole different level.  We’re talking like the opposite of a traditional cake where the frosting is on the outside and the jam is a surprise in the middle.  Yeah with jam cakes the frosting is the light, creamy surprise in the middle while the cake is dripping with jam from top to bottom.  It looks amazing in the photos I saw!

Jam as an appetizer is such an easy option for your next casual get together.  Cream cheese block on a plate, covered with jam, served with crackers.  Perhaps at its best with a good, chunky jalapeno jam for that nice touch of heat.  I love this with traditional pepper jam, but don’t be afraid of making fruit jams with added jalapeno.  I had this dish served with a raspberry jalapeno jam and it was delicious!

Beyond this, you can add jam to your charcuterie boards, dabble some over regular cheese and crackers, or spoon it over melted brie cheese before serving. The combination of sweet from the jam, and savory from the cheeses can be so amazing.

Using jam as an ingredient in your homemade sauces is a great way to sweeten up savory sauces.  There are many fruit based glazes for pork, chicken and fish that can be prepared simply by mixing varying amounts of soy sauce, garlic and onion powder, pepper and other spices, sarach or other hot pepper sauces, and/or chicken or veggie broth. There are many recipes that call for simply mixing jams with barbecue sauce to sweeten things up a bit. This is by no means an exhaustive list, but it hopefully serves the point to get you thinking about how easy it could be to kick your jam up a notch and turn it into something even more useful in your home cooking.

If you have ever eaten an egg roll, you may already be getting an idea of where this one is going.  There are a wide range of fruit flavors used in asian style cooking.  Thai sweet chili sauce and plum sauce for example are used with lots of stir frying and other recipes.  So, if you find yourself at home in need of these ingredients, why not start with some homemade jam as a base.  With the right complementary ingredients, you could create dipping sauces for egg rolls, glazes for fried chicken dishes like orange chicken, or a sweet and spicy sauce for rice or noodles.

To say that fruit and dairy go well together should be no surprise to anyone.  Who hasn’t had a soft serve sundae covered in strawberry sauce, or a fruit flavored ice cream or cup of yogurt.  Why not make some of those things yourself using your own jams.  Drop some jam in the bottom of a small dish before adding plain yogurt.  Stir before eating and it's no different than some of those fancy ready to eat yogurts sold in the store.  Drizzle jam over vanilla ice cream to create our own homemade sunday.  Stir some into yogurt before freezing into your own yogurt pops.  The list really goes on and on here as there are so many possibilities.

The internet is crawling with variations of meat and jam playing wonderfully together.  We’ve already talked about mixing jams into sauces, such as BBQ sauce, or using it as a base to glaze something like a pork loin or ribs while it's cooking.  I have been known to make homemade jerky that is heavily glazed during drying, resulting in a sweet, sticky, peppery meat treat. This works well with all sorts of meat, and I’ve even had some pretty epic smoked catfish that was glazed this way and it was delicious!

Beyond that, this section wouldn’t be complete without mention of sausage and meatballs.  These two frozen meat staples can be easily thrown into a crock pot with some jam and BBQ sauce and the resulting treat is just amazing!  Often served as an appetizer, these dishes could also be served over rice for an easy family meal.

I knew when I started researching this topic that I would find the iconic thumbprint cookies. I had made some in the past and just loved them as a simple, delicious cookie. The combination of short bread and jam opens a wide range of options if for no reason other than the wide variety of jams you may have stockpiled in your pantry.  I must admit however, that I was amazed by how many different versions of this specific cookie I found.  There is also a wide range of cookie dough, some with nuts, some with cream cheese, some rolled in sugar while others aren’t.  Some of the cookies were glazed after baking, others were dusted in powdered sugar, yet most left plain.  Still others were rolled and cut out and then layered with jam in the middle, while others had been cut into squares with opposite corners pulled up in the center. Like seriously amazing how many “different” cookies you could make from this one, basic concept of simple dough, filled with jam.

If cookies aren’t your thing… First of all, what's wrong with you?  Secondly, there is a pile of other delectable dessert options that embrace the luscious sweetness you so lovingly put into your jars this season.  The first one that caught my attention was the adorable looking jam hand pies.  They remind me of the glazed fruit pies we used to get at the bread store as kids.  Then there were the jam tarts, like tiny little open faced pies!  From there, things started to get interesting.  Jam cheesecake muffins, jam filled doughnuts, mini jam cakes, classic italian crostata, jam filled crescent rolls, puff pastry pinwheels, peanut butter and jelly bars, and I can’t wait to try jam filled oatmeal cookie bars.  It makes sense that something as sweet and delicious as jam would be featured in so many great dessert treats, but what an amazing variety.

For me, the number one use for jam is in cheesecake. The reason has nothing to do with anything other than a sense of nostalgia.  When we were first dating, my wife would make these amazing cheesecake cupcake things that were swirled with jam.  As time went by, she started learning how to make her own from scratch cheesecakes, and some of these, she would swirl with jam just like those cupcake things. I love my wife’s cheesecakes, and I love that I make most of this jam we have with my daughters a lot of the time.  So when those two things come together, it's like a sweet taste of everything that I love most in each and every bite.

There you have it, ten different concepts for using all that jam you made this season.  Which is good to know because if you don’t empty those jars, you're gonna have a hard time filling them again next season!

What is your favorite way to use jam? 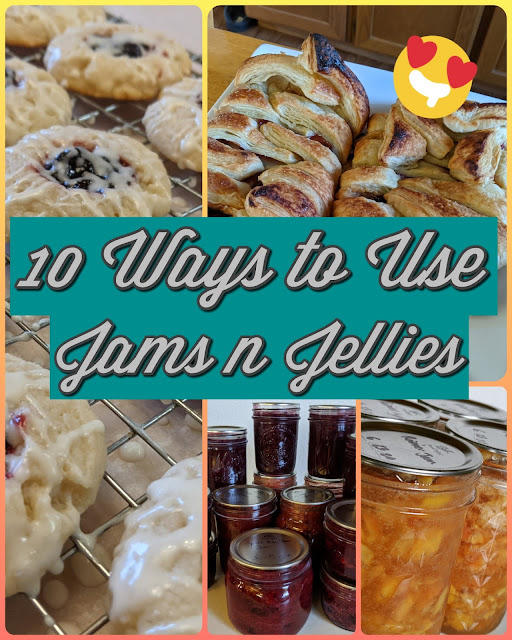 Posted by AtoZHomeandGarden at 8:41 PM