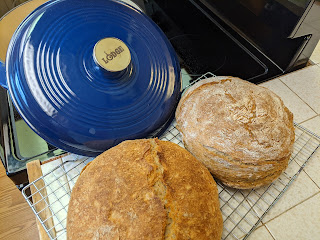 If you are interested in living a more self sufficient lifestyle, then you are no doubt working on building up your set of skills and knowledge.  It's good to learn more and more about gardening techniques, various animal husbandry practices, and how to preserve the food that you are able to harvest each year. We have been exploring a wide range of topics in these areas over the past few years, but a very specific skill we have been really exploring here the past few weeks is how to make bread from scratch. Learning how to make anything from scratch is no doubt a useful skill, and I can tell you now after over a dozen loaves of fresh baked bread, it will save you money (flour is cheap) and result in an amazing treat that rivals anything you can buy at the store.

I want to start this discussion right off the bat by saying that I have long been afraid of baking bread. For some reason, as a child I remember thinking that it took some magical skill in the kitchen to not screw it up. I am here to tell you that not only is there no magic involved, it is actually one of the easiest things I have ever made. And it tastes freaking amazing!

That being said, the style of bread we will be discussing does require a very specific tool, and that is a cast iron pot with a lid.  The lid is of specific importance in that the beginning baking process requires that the dough be placed into a preheated pot with a lid.  I use a Lodge cast iron pot and also have an old Calphalon cast iron pot (similar to this) that is slightly smaller and works just as well.  I did read a post about someone using a crock pot liner, so I would imagine a ceramic baking dish would work just as well. It must have a lid though, so keep that in mind.

So, let's get into the basic process.  The steps will go something like this... 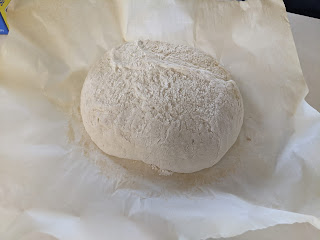 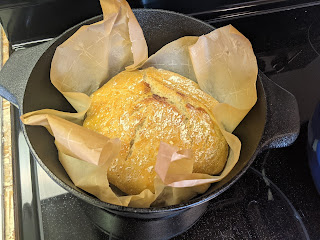 That is literally all it takes!  Six steps to fresh baked bread perfection!
If you are interested in the technicalities of this style of bread, this is typically referred to as no knead bread.  I guess because you don't ever knead it.... but trust me.... you NEED this bread in your life.  It is amazing!
Seriously though it's so, so easy to make. Especially with a stand mixer, which if you haven't figured it out yet, is not even necessary, you could totally just mix it all together with a wooden spoon and get a good result as well. This bread is also referred to by some as artisan bread.  The resulting loaf is beautifully crispy on the outside with a satisfying crunch to it when its fresh.  The inside is incredibly moist with a slight chewiness to it.  This I believe is from the intense initial heat of the preheated pot.  It cooks the outside very quickly, trapping all the moisture from the dough inside while holding any moisture that escapes inside the lidded pot during the initial bake. Removing that lid allows the outside crust to color up and develop that nice crunchy texture. Oh... I am getting hungry writing this!
If you want to get creative, of course you can play around with different flours.  We have done 2 cups of regular flour and 1 cup of whole wheat with decent results.  I've also added some powdered garlic and Italian herbs to the mix and it wasn't too bad. I'd love to experiment with some oat flour and maybe sprinkle some rolled oats onto the loaf before shaping it.  So many fun ideas to try. But honestly, its hard to beat just good old fashion plain, white flour for this loaf.  So, so delicious. 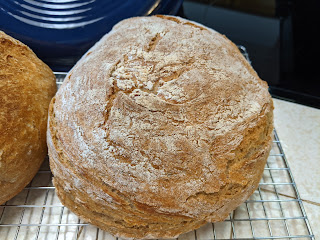 I personally think of this style of bread as peasant bread as it reminds me of stories of days gone by when poor farmers would huddle around a pot of stew after a hard days work, lapping up the broth with the crust of the bread. It just seems like something that could be easily thrown together on a daily basis each morning, then baked up that night.  It would pair perfectly with beef stew, or a pot of homemade ham and bean soup.  Pasta or other Italian dishes could work, as would a hearty bowl of curry or nice spicy chili.  It really is a versatile loaf and if we ever have one survive its first night, I would love to try making french toast out of it the next morning.  I bet it would be amazing.
I will close by offering my encouragement that anyone can make bread like this.  There really is nothing to it once you get the hang of it, and I believe, that learning and practicing these types of skills will only enhance your ability to survive and thrive this crazy journey we call life.  Give it a shot.  I can almost promise that you will be glad you did..... unless you burn it.  That probably wouldn't be very good.  Smoke alarms going off.... yeah don't burn it.  That's probably a key point for success.  Don't burn it. 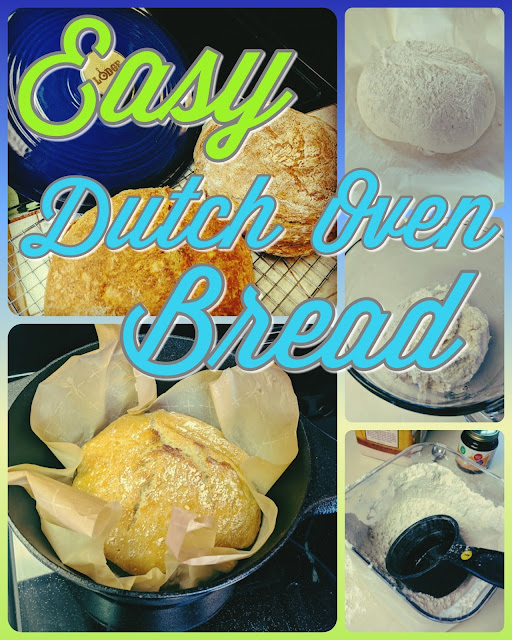 Posted by AtoZHomeandGarden at 9:47 PM No comments: